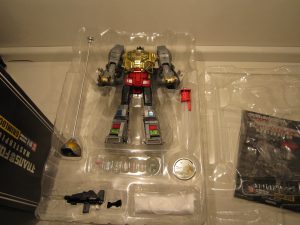 I bought Grimlock when I was waiting for Fantoys Scoria.

Grimlock is way to short compared to any other MP and looks like Devastator bashed his head down between his shoulders. 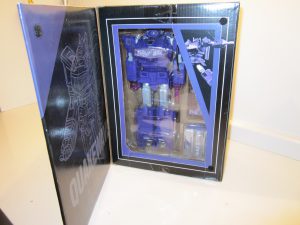 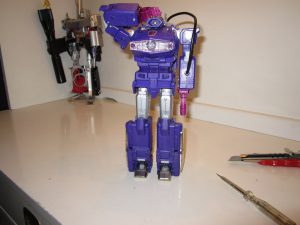 Fanstoys Quakewave, dunno which of the first run versions I have, but he is GREAT.

Second 3DP I ever bought and the one that convinced me that other than TT or Hasbro could make great robot toys. 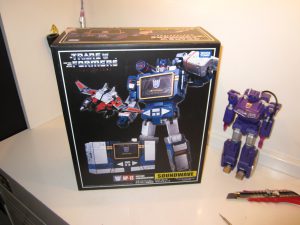 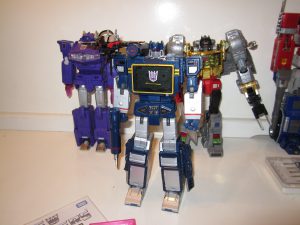 MP-13 Masterpiece Soundwave is the best posible MP from TakaraTomy (TT) yet and as of date is uncontended. 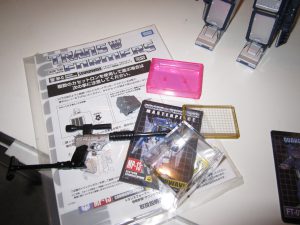 About half of these was reboxed for my move last year. 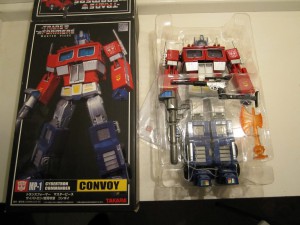 Optimus Prime Masterpice-1 is the largest and most poseable OP yet.

He weighs about 4 pounds due to a large 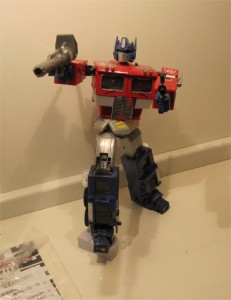 amount of die-cast metal mostly in his chest and lower legs. 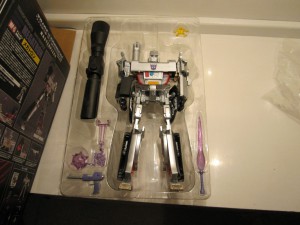 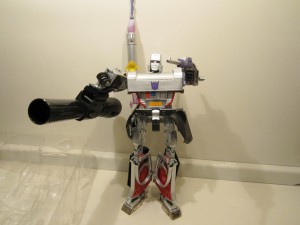 Due to rabid fan requests takara released this derpy disaster.

Apparently designed in less than 12 days and sacrificing to much of the robot mode to get the gun mode to look okay.

And since Takara sized the robot mode to MP-1 the gun mode is way larger than the real gun its modeled on.

This whole miniseries is just to justify that there are no Transformers stories happening on Cybertron.

When I first heard that Furman was going to use the Pretenders idea (Transformers in outer shells made to disguise them as organic beings) I was thrilled, then I read it and was disappointed that he opted to use them as nightmare fuel.  I’m still not thrilled.

And the idea that a pretender shell makes the wearer nigh invulnerable just just annoys me.  Anyway, despite that and all other quirks It’s decent and sets up a lot of hooks for later stories.

I haven’t even opened any of the Transformers comics packages I have received from NTFA for the last 10 months because I just couldn’t take any more of James Roberts and John Barber shit.

Well I found a “read IDW Transformers Chronological” guide and thought, I’ll have to read it some time….

After sorting it out on my work table and reading Megatron origins by Eric Holmes and autocracy by Metzen & Dille it felt like I was reading a different TF universe than the Roberts and Barber universe but it really struck home when I read Infiltration again for the first time in probably 5 years.

The TF universe Furman Created for IDW was amazing compared to the crap it morphed into and while I’m not going to say that Furman can do nothing wrong (he can, he does, omg he does…) he clearly intended it towards the grown up fans instead of those that glorifies each and every nonsensical stupidity of the G1 cartoon. The same rabid fans that IDW listened to and decided to reboot their TF universe with the “All hail Megatron” discontinuity party.

Infiltration in itself is great, Furman uses the human protagonists as an anchor to bring TF’s into reality and has in story rules of engagement for tf’s (even if we don’t get them spelled out) on why Megatron just dont land 60 Decepticons on earth and take over.

Despite the first issue “MTMTE” hide in plain view sneakiness its mostly action with the 3 last issues full on Decepticon VS Autobot and Decepticons VS decepticon brawl.

The Series ends with Megatron showing his Fusion canon into Starscreams chest and blowing away everything between neck and groin. And starscream survives it with Megatron indicating that its not surprising…

Well, I’m going to have fun figuring out to whom each of the stuff belongs to…